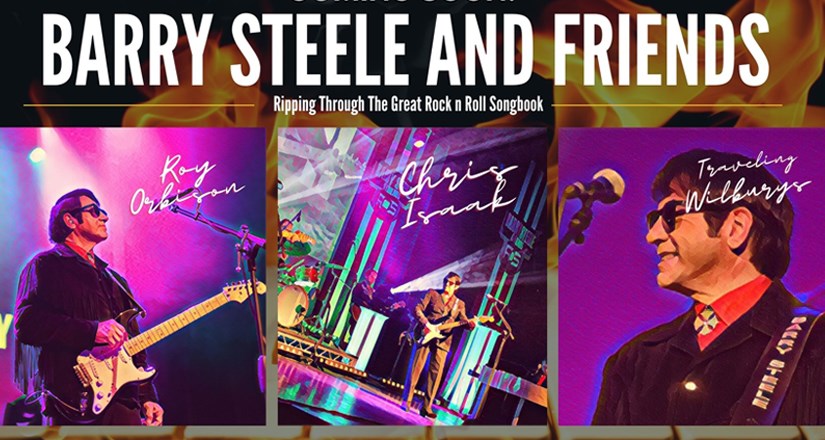 Barry Steele and friends return with 'The Roy Orbison Story'!

Barry Steele and Friends - If you want the real deal the name on the ticket is Barry Steele.

Barry Steele and a fabulous cast of musicians and singers will take you on a musical journey from 'The Black and White Night' right through to The Traveling Wilburys. They promise they’ll have you dancing in the aisles, with two fantastic shows in one great evening.

In 1988 Roy Orbison performed alongside Bruce Springsteen, Elvis Costello and KD Lang at The Cocoanut Grove, Los Angeles in what was to become known as ‘The Black and White Night TV Special.’ In Barry Steele and Friends, the evening opens with style as they pay tribute to this award-winning show with their version of this TV Classic.

As a great friend of Roy Orbison, Chris Isaak has collected many awards on behalf of The Orbison Family – known as the Orbison of the 90s, he also recorded many of Roy Orbison’s hits – in Barry Steele and Friends the compliment is returned as Barry Steele presents stunning versions of global smash hits ‘Blue Hotel and Wicked Game.

In 2017 Roy Orbison’s classic hits were remastered by The Philharmonic orchestra, in Barry Steele and Friends we bring Roy Orbison’s legacy into the 21st Century show with critically acclaimed symphonic versions of Heartbreak Radio, Blue Bayou, It’s Over and of course, Running Scared.

In 1988 Roy Orbison joined a group of iconic artists known collectively as ‘The Traveling Wilburys.’ Their musical legacy remains as vital and as popular today as it was back in the day. In Barry Steele and Friends, the whole cast comes together to celebrate those 35 years and truly defines the spirit of this original supergroup with their versions of those masterpieces. From Handle with Care to The End of The Line, the second show of the evening is jam-packed full of ‘Wilbury Magic.’

With big-screen projection and the incredible voice of Barry Steele, this top-class production has something for everyone!