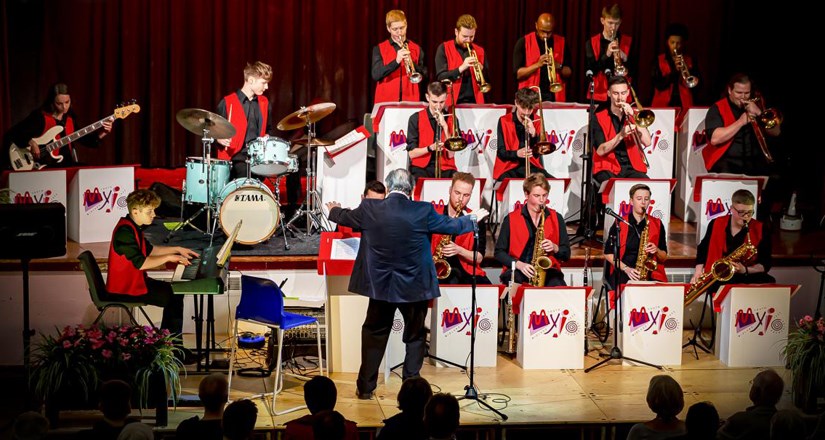 The talented Midland Youth Jazz Orchestra return to The Core Theatre Solihull for 2022, under the expert leadership of John Ruddick MBE. Don’t let the word Youth fool you though – the senior band is an outstanding, award-winning group who will blow you away with their musical abilities.

MYJO have won the BBC Big Band competition so many times that they were forced to rewrite the rules to give others the chance to win! This talented band are regular performers at Solihull's Core Theatre and their skill and expertise, under John Ruddick ensures that their shows regularly sell out so early booking is highly recommended.

They will be joined by a special guest Georgina Jackson.

After acquiring a strange and somewhat unfashionable obsession with Jazz and Big Band music at an early age, (and in Wigan!) Georgina began her musical career working as a professional trumpet player almost everywhere up, down, left and right of the country.

Working for years with many famous faces, such as Frank Sinatra Junior, Nancy Sinatra and Seal and touring Big Bands, Georgina learned her trade as a lead trumpet player. Having sung in and led various sized bands with miscellaneous musicians in some very miscellaneous venues, Georgina decided to record and release her first CD.

The critical success of her first album led to Georgina landing her dream job as resident singer with the Ronnie Scotts Jazz Orchestra, where she performs regularly.  From the BBC Big Band and Concert Orchestra, and singing in session with the BBC  Band to the Proms at the Royal Albert Hall, Georgina's unique talents have captivated and excited audiences of every age!

Suitable for all ages