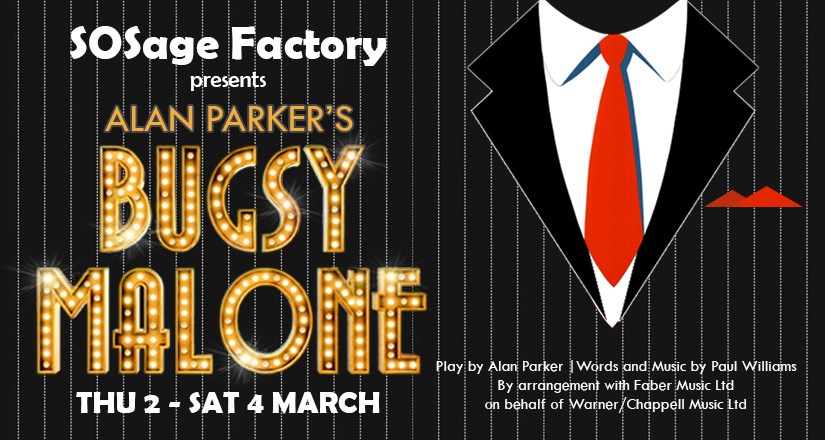 Based on the hit 1976 film, starring a pre-teen Scott Baio and Jodi Foster, and featuring a catchy, swinging score by the composer of The Muppet Movie, Bugsy Malone JR. is good, clean, comedic fun!

Two gangs in a fictitious city populated only by children are in a rivalry of Capone-ian standards. Dandy Dan's gang has gotten the upper hand since acquiring the "splurge" gun (a weapon that shoots whip cream). Bugsy Malone, a one-time boxer, is thrust into the limelight when he becomes the last chance Fat Sam's gang has of surviving. All Bugsy really wants to do is spend time with his new love, Blousey... but that just isn't in the cards for our hero.

SOSage Factory are an amateur dramatics society, whose performers are all between the ages of 8 and 18 years. They are part of the Solihull Society of Arts (alongside sister group Solihull on Stage). SOSage Factory is a really friendly group for young people interested in acting and performing, and they are always happy to welcome new members. They meet weekly though the school year, on a Saturday afternoon at Knowle URC on Station Road.

If you have a young performer interested in joining SOSage Factory and getting involved in their 2023 production of Bugsy Malone, get in touch with them at Sosagefactory@aol.com.

Suitable for all ages